One black and white cat’s persistence kicked off a chain of events that has brought a lot more smiles to the world, in more ways than one, with Alliance for Smiles.

Smudge (so named because of a mark on his nose) is one of two cats who reside with Anita Stangl, Alliance for Smiles’ Co-Founder and Special Advisor. Anyone who has had a video call with Anita during this pandemic can attest that Smudge is nothing if not reliable – he never misses a meeting and prefers to be front and center on-screen for most.

“He is quite a handful and during this entire pandemic has assumed the role of collaborator on every Zoom call in which I have participated,” Anita shared. “People even joked that he should become an honorary member of the Rotary Club of San Francisco, which brought up the idea that since he and other pets have made us smile during the pandemic, perhaps they can be used to help us bring smiles to the children we serve.” 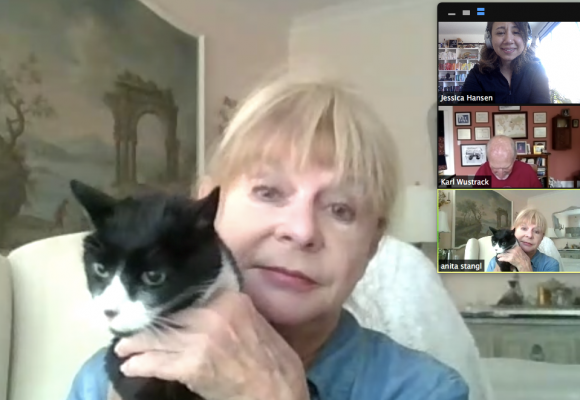 She presented the idea to some staff and board members at AfS. The team had never heard of anything like it, but the idea was so fun, light-hearted, and fantastic that it was worth a try.

“Therefore, we came up with the idea of a ‘Pet Project’ and reaching out to honor our pets while raising funds to help our patients smile. We even renamed September to “Pets”-tember,” said Anita.

Within weeks, the AfS: Pet Project  was ready to launch. Throughout the month of “Pets”-tember, which is more commonly known as September, humans could enter a photo(s) of their pet(s) they considered most likely to bring smiles to people’s faces along with making a donation to the organization. Then, anyone and everyone could come to the website and vote for up to three pets each day throughout the entire month.

The team had no idea if anyone would enter or vote, but they needn’t have worried. Around 40 pet photos were shared, and the winning pet (Charlie, read more about him here) alone received over 3,000 votes! The runner-up Harley, also almost hit the 3,000 vote mark, and there were three adorable honorable mentions and awards for all the pets! For example, the “least traditional pet” awards went to Spike, the African pygmy hedgehog, and Teddy, the teddy bear.

“Unfortunately, not many people voted for Smudge,” said Anita, “but he still makes me smiles when he is not driving me crazy.  I am so lucky.”

Participants met online to celebrate the winners and all the pets for the immense joy they bring to the world. The whole AfS team expressed their gratitude for all the pets and their “human companions” who stepped up to help children in need this Pets-tember!

Anita shared, “We want to thank everyone who submitted photos of their pets and those who voted.”

In the midst of wildfires, hurricanes, and a pandemic, one cannot help but be impressed by this assertive cat, who inspired a fantastic and heartwarming campaign that helped take our minds off the news for a moment and who raised funds to support children with cleft and the medical teams who serve them.

The Mascot of Smiles: CharliepreviousAlliance Highlights 2020/2021next