This week we highlight a real powerhouse of the organization: Anita Stangl, Humanitarian & Founder of AfS!

Anita helped found Alliance for Smiles and was the President & CEO until 2016.  Anita is a force of nature.  She was one of the first female members of the Rotary Club of San Francisco in 1987.  Her dedication to humanitarian empowerment and her belief in social improvement drove her to achieve what many said was not possible.  She is unstoppable when it comes to helping children and under-served people around the world. Her passion dictates her actions, which reflect her unlimited generosity and desire to spread love throughout the world. 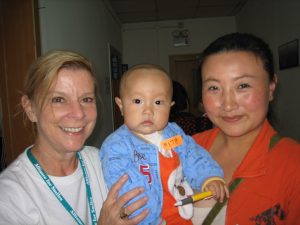 Anita became involved with cleft lip and palate repair in 1994 when she volunteered for a medical mission to Chile.  Since that time her heart has been taken by this work, and her career shifted to developing cleft organizations.  Acting as President and CEO, Alliance for Smiles was founded by Anita with five other Rotarians in 2004. She worked day and night to make her dream come true and has been able to save more than 6,129 children worldwide, by working tirelessly with many doctors, nurses and Rotarians. She claims she retired in February of 2016, but since then she has been hugely involved with AfS as a special advisor – looking nothing like a retired person at all!