In the face of the gloom that Covid-19 presents to all of us, as I came to know Dr. Karl O. Wustrack, I became optimistic knowing that Alliance for Smiles will continue to bring smiles to families far into the future.

As Medical Director and Chairman of the Board for AfS, Karl can assure children all over the world they will be in skilled hands. And while he devotes time to fundraising we can be certain that AfS will continue to carry out our mission of transforming children’s lives long term.

Let me paint my word portrait of Karl as I view him.

We see Karl in Oaxaca as he sets up shop in a semi trailer truck that will serve as his operating room. A man from a distant village trudges up to the semi. He arrived after a long bus ride, worried about a cyst on his neck. Dr. Wustrack takes a look, identifies it, and easily removes it. The man’s relief glows on his face. He leaves by bus to return to his distant village. A couple days later Dr Karl is surprised to see that the man is back again as if the countless hours on the bus were of no concern. He arrives bearing gifts. He has made clay jewelry for all the nurses and carries a special gift that truly touched Dr. Karl – a machete that he had inscribed with the words “you are my savior.”

While Karl, the sole surgeon on this mission to Oaxaca, is holed up in his semi-truck trailer, a member of his family is there too – his teenage daughter. Her task is essential. She is swatting flies.

On some missions we also see his wife, Diane Wustrack, who frequently serves as the coordinator. She is with several young children while they wait their turn to go into the OR. Diane is teaching them to make balloon animals. They are happy to be engaged and to put the upcoming surgery out of their minds.

The family album has some old photos. Thirty five years ago with his medical degree fresh in hand, Karl knew he wanted to do something extra special with his surgical training. He went off on his first of many cleft missions. All tallied, since that day, he has done more than 1000 surgeries worldwide, all gratis or with a machete as a reward.

Our painting unfortunately has some very dark areas that point to the urgency of the work AfS is carrying on in the developing world. On one trip someone came to tell the team that they urgently needed to go to a village to see a couple of children who were not on the list scheduled for surgery. They arrived too late; these cleft kids had already been killed.

On a recent mission a family showed up with a child that hadn’t quite reached the 10 pounds and 10 week threshold required for surgery. This child was slightly underweight. The mother explained to the Doctor, ”if you don’t do the surgery now, the village will probably do something, like kill him or ostracize him.” In that case Dr. Karl had to bend the rules. He operated to save the child’s life.

Karl is so committed to helping children that he is constantly spreading the word. He works at recruiting his colleagues, especially younger doctors, to join with him. He tells them that they can hardly imagine the immense personal satisfaction they will experience by helping young people who otherwise would not have access to surgery. He doesn’t take “no” for an answer. Clearly not only has he left a lasting imprint on the children and their families in countries where he has worked. But over the years he has changed his colleagues’ lives as well. 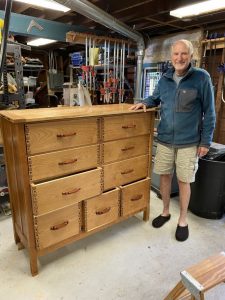 In our collage there is also Karl’s grand vision for the future. While we all wait, and wait some more, for a vaccine to end the plague, every day Karl plans for a time he will be off on another mission. Like a manager of a professional sports team, now that it is his off-season, he is casting his dream team with the same intensity as when he competes in his senior basketball league. He designs and recruits his team to include pediatricians, anesthesiologists, nurses, speech pathologists, dentists, orthodontists, and social workers. He strategizes new ways to provide follow-up care for children on subsequent missions. In semi-retirement his skilled hands are far from idle. In his well equipped basement shop he makes furniture. His latest creation is this chest of drawers of  cherrywood, ebony details, and bloodwood pulls.  While he works with wood he can hardly wait to be back on a surgical mission, because as he told me succinctly, “the kids are waiting for us.”