In 2018, on one of our medical missions to Yangon, Myanmar, Alliance for Smiles was able to treat a very special boy named Phon Shin Yein for his cleft lip and palate. Phon Shin Yein and his family are from Nogmung, which is extremely far north and a very long 24 hour bus ride from Yangon, where he was treated by AfS. 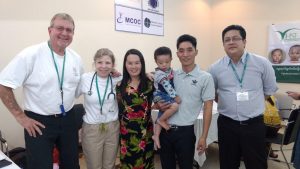 After his surgery, one of our volunteers, Sophie Stone, was able to get to know him and his family very well. Sophie has been able to stay in contact with them despite the difficulties that come along with the area they live in, such as no phone connection and little to no transportation in and out of the area. 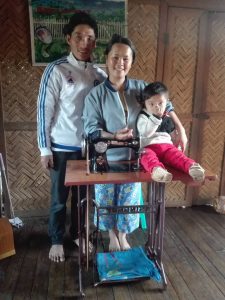 Phon’s father is a pastor in their village and very talented in music, and Phon’s mother is a nursery school teacher and an incredible seamstress. Last year, Sophie’s church was even able to help Phon’s mother buy a sewing machine.

Recently, the family visited Sophie in Pyin Oo Lwin, which is a colonial town famous for its botanical garden. There they were able to catch up, and Sophie later shared the great news with AfS about how well Phon has been doing since his surgery!

The missions of AfS go well beyond the surgeries, trainings, or Treatment Centers we provide. At their heart, they are truly about connecting the humanity in all of us, across vast distances, national borders, language barriers, and varied backgrounds. We love when our patients and the volunteers who make it all possible build and keep these deep and wonderful connections. Thank you for the update, Sophie!