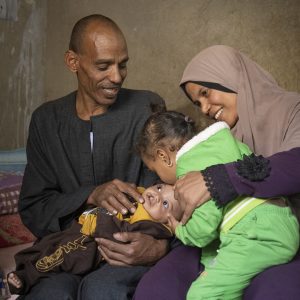 Zien, the youngest son of Sabri and Sabra, was born in the small Egyptian city of Edfu.  When Zien was born with a very severe cleft lip and palate, his parents immediately gave thanks that the problem wasn’t something more serious that required intensive care. But still they knew that they would never be able to afford the surgery to repair Zien’s cleft.

Then in 2019 Sabra learned that an American group was coming to Egypt to provide free cleft surgeries!  So, a month after Zien was born, they packed up the family and traveled two hours by bus to Aswan.  There they met the AfS team, and learned that not only would their son get the free surgery that he needed, but he would also become a celebrity – the 7,000th child treated by AfS!

Zien’s surgery went beautifully, and the family was so thankful for the excellent care that he received.  They had such bright hopes for their son’s future. 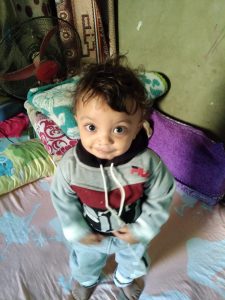 That was one year ago.  And the future has indeed been bright for little Zien. He has thrived after receiving his lip surgery.  And thanks to local Rotarian Eman Sallam, he has now gotten his cleft palate fixed free of charge!  Eman’s friend Dr. Mamdouh Abuelhasan is a plastic surgeon at Children’s Hospital of Cairo, and he agreed to provide the surgery that little Zien needed in order to complete his cleft repair.

When the family came to us last year, mom and dad told us they had basic wishes for their son. They wanted him to be able to eat, drink and speak properly, and they hoped that he would never be bullied for his cleft, which they knew was a very real possibility.   Thanks to the generosity of a world-wide community of humanitarians all of their wishes have been granted, and Zien will grow up not even remembering he ever had a cleft!