I heard a bright voice emanating from the corner of the room and found that it was from Mahmoud Yakout. Mahmoud is a blind man whose lack of sight does not limit him in any way. Energy emanates from his every word; his enthusiasm for life is immediately apparent. Mahmoud is now 22 years old and in his last year of university. He came to AfS through American Field Service as one of our many competent interpreters. You might think that his lack of sight would limit him in being able to assist us, but it does not. This young man traveled alone for eight hours by train, from Cairo to Aswan, and arrived on time for his shift at Aswan General Hospital. Mahmoud is electriﬁed as a “defender “of human rights, and says he is “not yet qualiﬁed to be an activist”. After he ﬁnishes taking courses at Amnesty International and volunteering, he will then consider himself as a qualified activist. He believes that we are all the same on the inside and should be treated equally. This is his calling and he loves volunteering wherever and whenever he can. Mahmoud said, “Languages love me and I love them.” and this is why his major is languages. In addition to his native Arabic, he has mastered English and Spanish. He is also adding French and German to his repertoire now. As Mahmoud said,” I am the hyper one in my family. I have a voice and I am always loud.” And indeed, he is; his voice will be heard wherever he goes as he is one to listen to. His is a soul tuned to the needs of the peoples of the world. 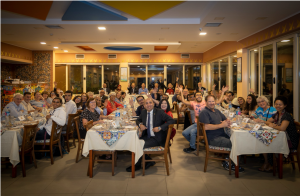