John Uth was one of the Founders of Alliance for Smiles and served as Chair of the Board from 2004 until his death in 2012.

To memorialize his huge contribution to the work of changing the lives of children born with cleft lip and palate, AfS created this special award. Without financial contributions from our generous and tireless supporters, it would be impossible to undertake our life-changing medical missions. 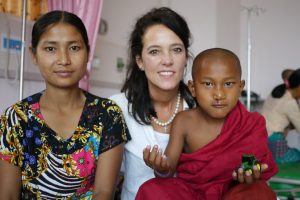 It is a great honor this year to recognize the incredible Tina Fischlin for selflessly and continuously contributing to the work of Alliance for Smiles through her continued efforts in fundraising for missions. Since first joining the organization as a Board member in 2008, she has been incredibly creative and successful in rallying groups of friends, Rotarians, and other individuals and organizations to become supporters of our work.

Tina has shown herself to be fully committed both nationally and internationally as a leader in humanitarian efforts. She is dedicated to improving the health, lives and opportunity of disadvantaged people around the world, and has participated in or led over 25 humanitarian missions in Asia and Africa. She heads up AfS’s East Coast operations and has previously also been awarded the Distinguished Service Award. She’s played almost every role on AfS missions and has been particularly instrumental in scouting new locations where our work is most needed, and securing the funding to ensure we can get there.

Alliance for Smiles is so pleased to recognize her many, amazing efforts by bestowing this prestigious award on Tina Fischlin. Thank you so much for your incredible work and support, Tina!

“Together we can put a smile on the face of a child!” – Tina Fischlin