Every Child Deserves to Laugh & Smile

Dear Friends of Alliance for Smiles,

As the end of the year approaches, I am reminded of how lucky and proud we are to have accomplished so much good in a year where the world is in such turmoil.

Here are our top 3 accomplishments:

1. we have made considerable progress on our new treatment center plans for Nigeria and Myanmar;

2. we have now transformed the lives of 6,385 children around the world, and,

3. we have begun a long-awaited shift in China towards making each of our five treatment centers more self- sufficient. This means that while operating on children, we also will be training Chinese doctors to do the surgeries without our help. Our teams will be smaller, our missions less expensive and our effectiveness will grow. The doctors we train will train others thus creating a sustainable conduit to permanent self sufficiency. This also means we can run more missions and reach more areas without increasing our costs!

Equally exciting is the work Executive Director, Alison Healy has been doing on the home-front.

Fantastic changes are afoot! I hope you have noticed our new logo and website? Also, our medical internship program was launched in Myanmar this year, our social media presence has grown to include four platforms and is already helping to reach a new and younger demographic.

I know you will agree with me that while keeping our overhead at 6%, we have done much good in a short time.

WE CAN ONLY CONTINUE THIS GREAT PROGRESS WITH YOUR DONATIONS. DONATE BEFORE THE END OF THE YEAR. Thank you and Happy Holidays!

Karl Wustrack,
Chairman of the Board 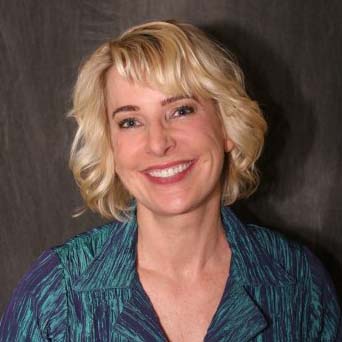 I am so excited to share with you some of the innovative new programs we have been working on!

Here are just a few:

We are also organizing and hosting regular events throughout the year, including: Networking for Good, Jeremy’s Mixology Class, and Exquisite Hors d’ oeuvres with Elegant Wines in Mill Valley. Check out our website for more details!

We Have a New Logo, and our New Website has Launched!

After months of hard work, we can proudly present our new website. A huge shout out to our volunteer Web Designer, Wendy Schaefer, who has so beautifully spun our story into gold. We are so proud of our new
cutting-edge site and logo, and invite you to take a look: www.allianceforsmiles.org

My first year with AfS has been such a rewarding experience, and I look forward to many more to come! 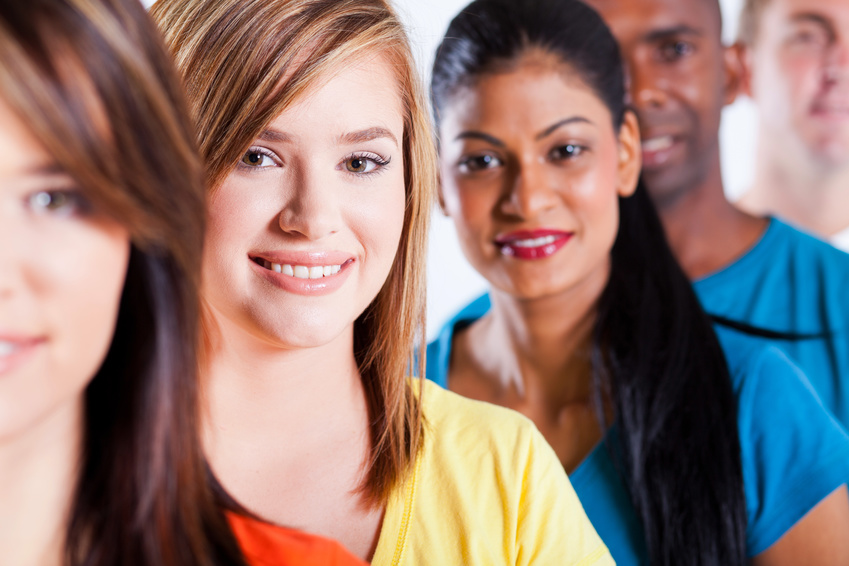 We just had a soft launch of this fledgling program and found it to be so exciting and worthwhile as a teaching tool and an income stream.

Effective immediately, we are offering medical internships to young adults 18 and over during our surgical missions.

We will be offering an unprecedented opportunity for interns to have 24/7 access to medical professionals in an intimate team setting.

Interns will rotate to all stations during opening clinic learning to evaluate which child is eligible for surgery and later moving into the OR and recovery rooms for close-up observation and Q&A.

Among our newest of programs, GSA is designed to allow ANYONE at ANY LEVEL to help us by fundraising in their own name within their own social circle (ie you will get all the credit, fame and fortune that goes hand-in-hand with doing good!) and with as many or few hours as you want to contribute.

2. Set a minimum fundraising goal: we encourage you to adopt a minimum goal of $1,000. This will provide a complete and transformative cleft operation to one child.

3. Tell the AfS story as your intro to the “ask” (we have templates you can use all ready to go) and ask away.

4. Reach out to your network by social media, email or phone. Ask everyone you know to donate and to share everyone they know. 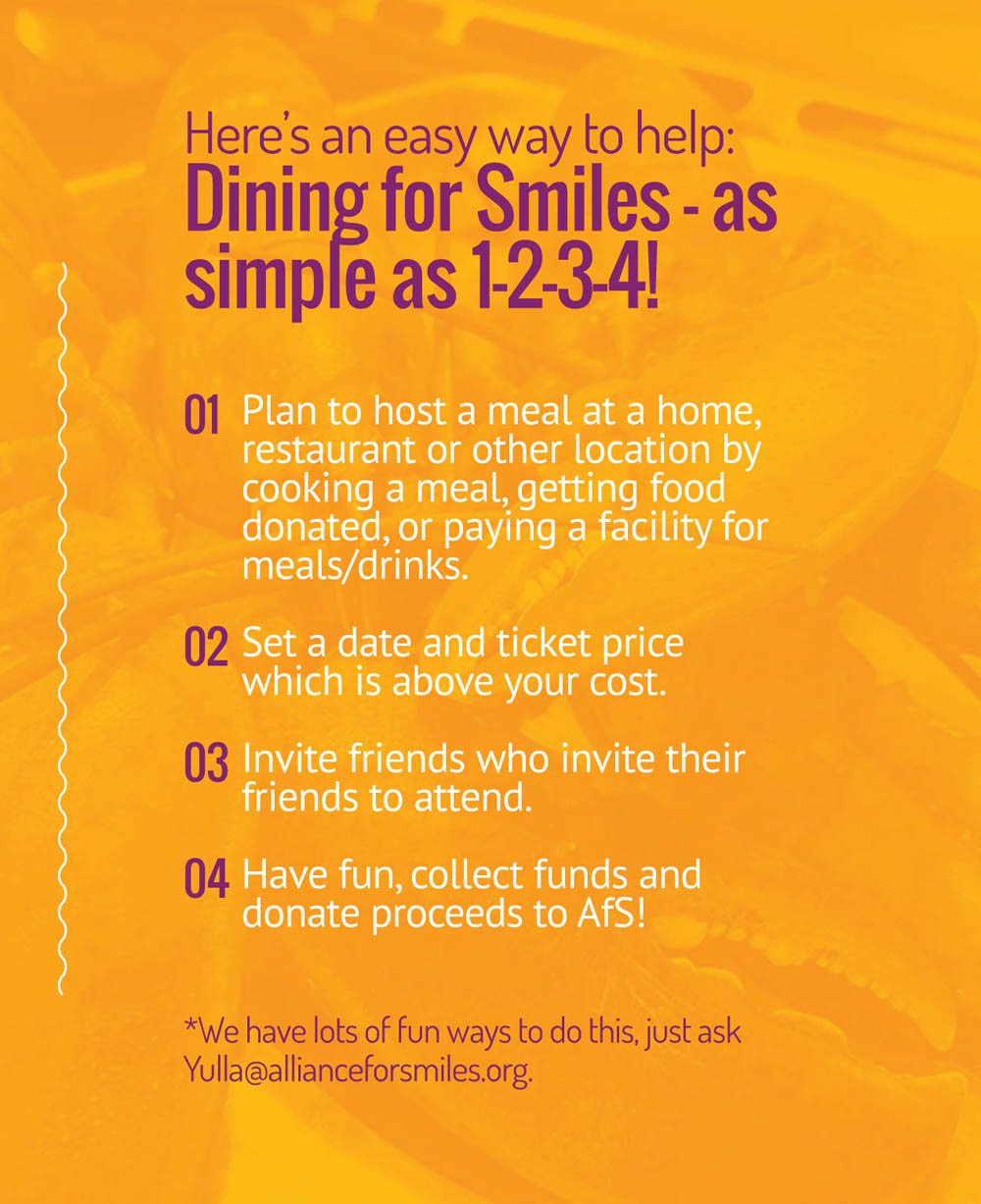 Below are some of our stories…and your donations make them happen. Donate before the end of the year! 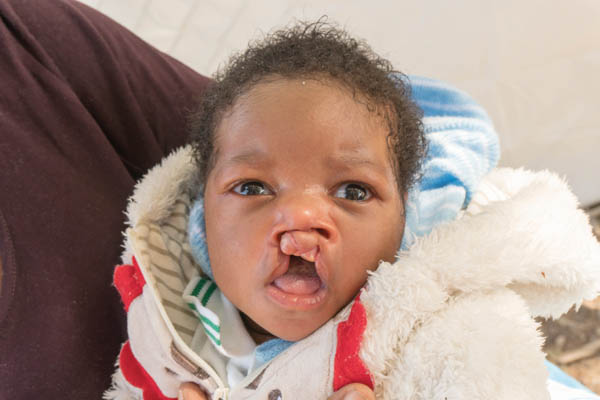 On a beautiful Monday morning, Auxillia, a young mother woke up full of hope.

The previous week she had received notice that a team of doctors, nurses and support staff was coming to Chitungwiza from America to help people with cleft anomalies.

Her son Emanuel was born only four weeks earlier with a bilateral complete cleft lip and palate.

She knew nothing about clefts and did not know there were surgeries that could help him. She came to accept his condition and then learned of our mission. It seemed like a miracle.

Unfortunately Emanuel was just far too young for surgery. AfS has strict standards for age, weight and hemoglobin levels to ensure a patient’s safety for surgery, and at 4 weeks he did not meet the 10-week minimum age. Surgery would have to wait.

Auxillia said she will wait for AfS to come back and will be first in line with Emanuel on the screening day. Please donate today so we can return to Zimbabwe to help Emanuel and others like him. 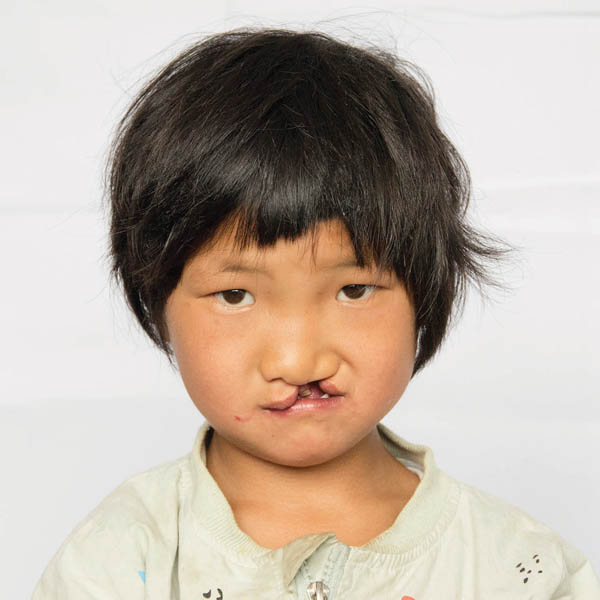 Mrs. Zhou and her husband are farmers who grow potatoes and corn in their town with their two children.

One day, Mrs. Zhou walked up a hill planning to pick some herbs. During her search, she discovered a little baby lying at the foot of a big tree, covered in wet leaves with only her face in view. Mrs. Zhou pulled the baby from the wet leaves and carried her to her home. Piao Piao was unconscious until Mrs. Zhou washed her and gave her some warm liquid.

Mrs. Zhou wanted to keep her as her own; however, Mr. Zhou was opposed to her idea because their income was very limited and he felt they could not afford the additional expenses.

Mrs. Zhou, a very compassionate person, and did not want to abandon Piao Piao. She took Piao Piao to 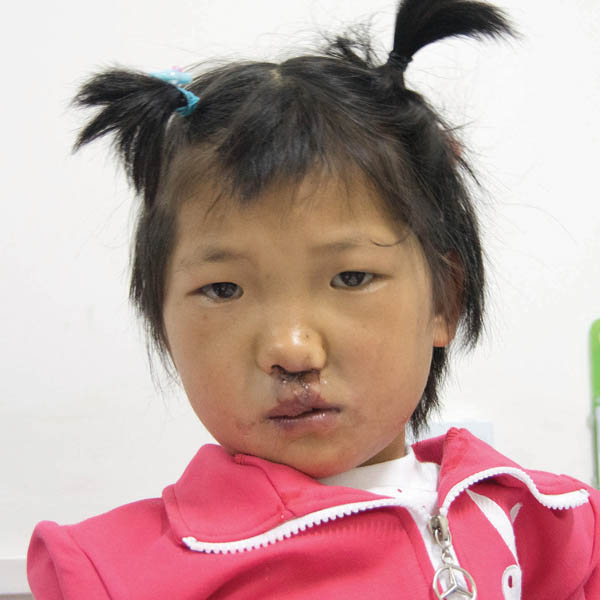 the local police station and hoped that the police could find her birth parents.

After months of searching, the local police were unsuccessful and notified Mrs. Zhou that she could adopt Piao Piao. Mrs. Zhou was very grateful to hear that and in fact did adopt her.

Since then, Piao Piao has been part of their family. She was born with a cleft lip and a hearing      problem.

So when Mrs. Zhou heard that the AfS medical team would be arriving at Weining Hospital to perform free operations in June, she took Piao Piao there and hoped she would receive the necessary surgery.

Piao Piao has received her life-changing surgery and is on the mend ready to step into her new life with a new smile. 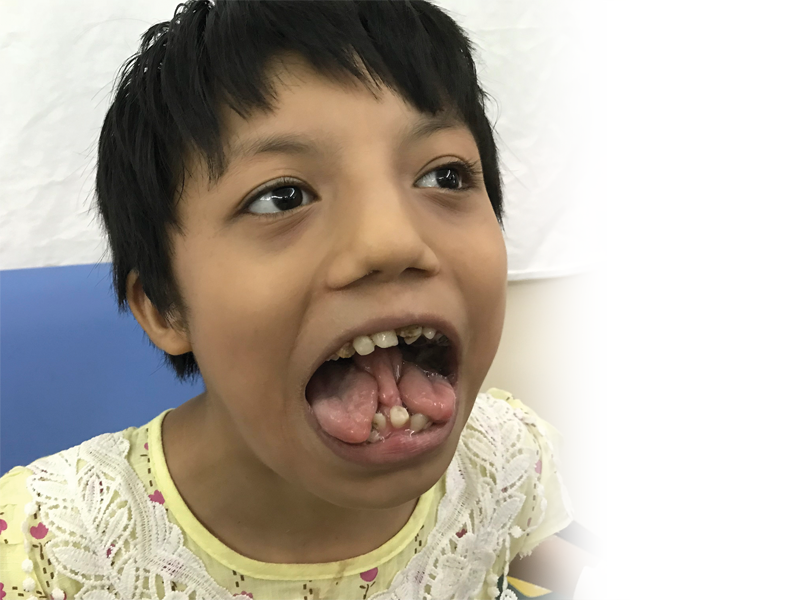 Thoon Nay Chi Htun is an only child who was born with a very rare trilobe tongue and developmental retardation. This condition was only first documented in a case study in 2014. She lives with her parents in Tha-Byu Village about 6 hours from Yangon where AfS operated on her.

Thoon’s life is lonely because she does not go to school and has very few friends. She enjoys writing, drawing, watching TV and playing with her toys just like all 8 year olds do.

But unlike all the 8 year olds she knows, she cannot talk much and has a hard time eating. She also endures teasing from most of the kids who see her tongue. She prefers to stay inside and play alone at home so that no one can hurt her feelings.

Thoon’s parents began looking for doctors for their daughter when she was just months old. Her condition is very rare and finding doctors who had the experience and expertise seemed impossible after five years of looking for help.

It seemed like it was too good to be true when Thoon’s parents saw a Facebook post stating that Alliance for Smiles was coming to Yangon to perform cleft surgeries. The family bundled up their belongings and made the long trip to Yangon.
Our surgeons were concerned about possible issues with her airway, especially since the tongue would be swollen immediately after surgery, but in the end, we decided that Thoon was in fact a good candidate for surgery.

Unfortunately, we were unable to guarantee a space for her in the already full surgery schedule, so her family sadly made the long trek home…But as if their prayers were heard, Thoon’s family received a message through a friend of a relative that a space had opened in the schedule! So much had to be put into place for her dreams to come true that everyone in her village helped where they could to make sure her bags were packed, she had enough money for her trip, and that she got there in time.

Thoon did get to Victoria Hospital on her scheduled day and her surgery went off without a hitch!

Thoon returned home knowing that no one will tease her about her tongue ever again. How lucky we were to be able to make a difference in Thoon’s life!

Thoon will come back for an evaluation when AfS returns to Yangon in 2018. We hope to operate on her soft palate which may improve her speech.

On screening day in Chitungwiza, Zimbabwe we met Myasha Hera and her daughter, Trish. They come from Mutoko in an eastern province, about an eight hour trip to Chitungwiza.

Myasha is 24 years old and was born with multiple anomalies, her lip, palate and feet. As a young girl people in her village laughed at her although there were a few that would encourage her too.

She was orphaned by age 8 and, when relatives refused to take her in, was sent to live in an orphanage. 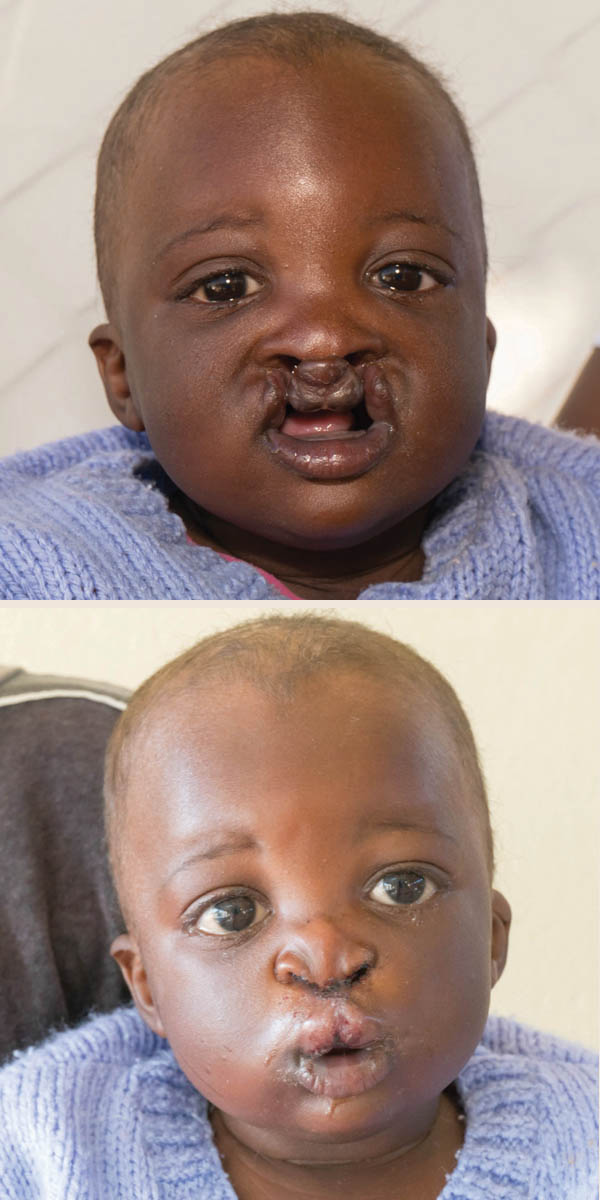 Over the years she received 4 surgeries for her lip and palate and one for her feet. She lived at the home until she was 19 and, having finished school, was told to return to her relatives.

Once again they would not take her in so a worker from the orphanage took her in.

At church Myasha met and married her husband and together they had a little girl, Trish. When her daughter Trish was also born with a cleft lip and palate, Myasha knew the hardship she would face, but loved her all the more for having undergone it herself.

When the family came to our opening clinic, they were over joyed that the team would be able to operate on both Myasha and Trish!

Myasha had a opening in her palate repaired as well as some diseased teeth removed. Trish now has a complete smile since her lip has been repaired.

Myasha prays that Alliance for Smiles will continue helping in Zimbabwe, performing operations and teaching the local doctors how to do the surgeries so that many more people will be helped.

She would also like for her daughter to have her palate repaired. 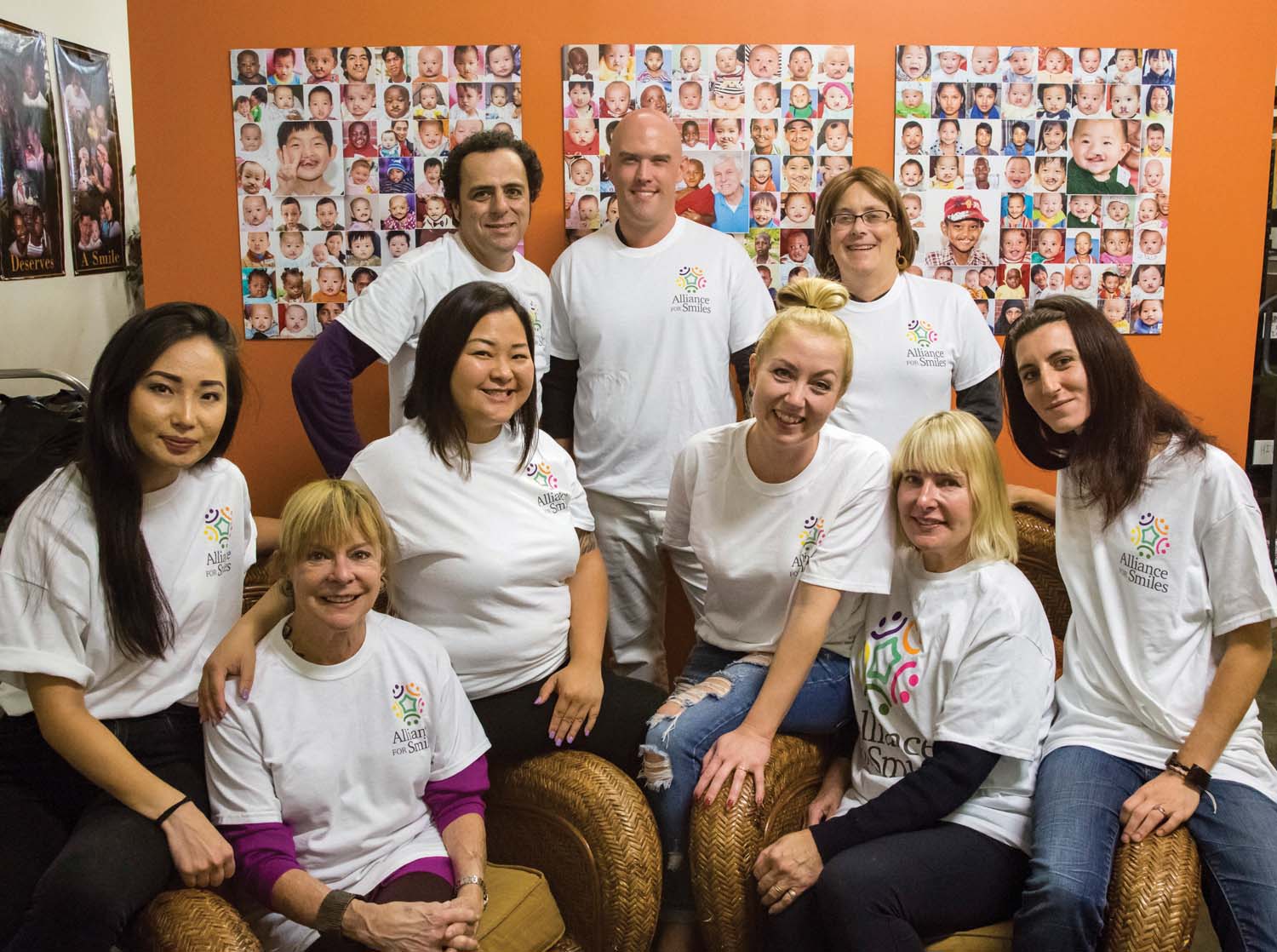 The face of the office is changing. In addition to our three paid staff and bookkeeper, we have gained several volunteers and interns who are available to us through a program from the City of San Francisco.

Hailing from France, our new Office Manager, Yulla-May Nicolas has experience with nonprofits, special events and even a degree in International Relations! Jeremy Rhodes, our new part-time bookkeeper, keeps our finances tight!

Our new interns are Rae Raucci and Elise Yeung. Rae assists Paul with mission coordination, and Elise is on top or our social media. Other volunteer office staff include graduate students Priscilla Chen, who specializes in Chinese medical translation; and Helen Manlai, who is designing the new Medical Internship program.

Rounding out the AfS team are two new remote volunteers: Shelly Rosenberg in Tennessee is our photo and copy editor; and Wendy Schaefer in South Carolina is our web designer and graphic artist.

Save the Dates! Upcoming Events